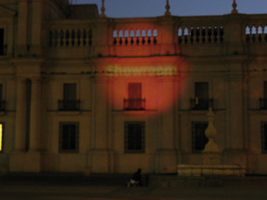 The starting point of these performances is a journalistic note from Chile: The fake inauguration of the Curepto´s Hospital. I reflect on the mass communication reality and the political fictions, which are used as representation strategies. From this point a wonder about the power of limits of simulation, and how the art techniques role enters in the political scenario of Chile, in other words, power moves towards a performative space.

Thru this performative act that almost recovers the space that was taken from art and I intervene this territory, these performances were made in the most representative space of power, the Palacio de la Moneda or the showroom as I have renamed,  physically belong to the Government of Chile.