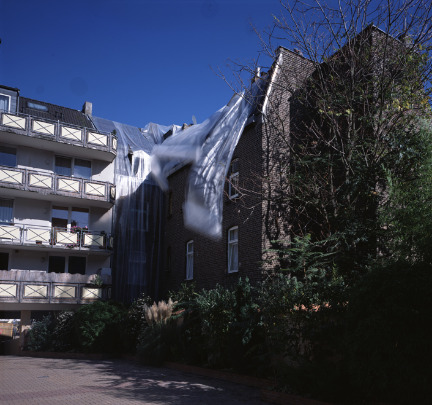 Since 2005, my daily life is reproduced in a squatter house in the neighborhood of Ehrenfeld in the German Suburb. I have come to notice thru my experience of living here, that it did not existed a common ideology that appropriates the maintenance of an old building, this place has become an individual resistance against capitalism, and at the same time with the purpose some of the habitants to own their spot, which it turns to be a paradox.

I have been thru an absurd and delirious repression from the feminists of the old school by living there, a “vicious white feminism”, I have named it this way, because they have not been capable to dialogue without ending in a violent act. In these performances means to me the fall of multiculturalism in Europe.

I wrap this house in transparent plastic so its architecture can still be appreciated, the house resisted the bombing of World War II and it was built for the factory worker to live in it. It has only one bathroom per floor, it does not have any showers and 5 individuals lived in a 30m2 area. I reflect on the house I live in every day with a white feminism and causeless to the pink market. In this work I pretend to show the asphyxia that means living in a wrapped house in toxic plastic as a clear example of a liquid architecture.