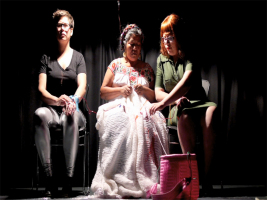 We propose as pancoreographic to a main device that visualizes an extreme side of the necropolitic governability of gender in our Latin-American countries, in which we have overlapping in diverse nature between different regimes in the body´s management: sovereign regime- corresponding at the moment of colonization-, where the body of the population (and especially women) is a body for death (the patriarchal power is understood as the sovereign power that uses domination techniques, positions, and elimination of the other) and the contemporary regime where the body (of women, although not exclusively) is a body of the capitalist system (conceived bodies, especially, as production/reproduction force, in which economical profits are prioritized above all and also has a high cost in blood spillage.